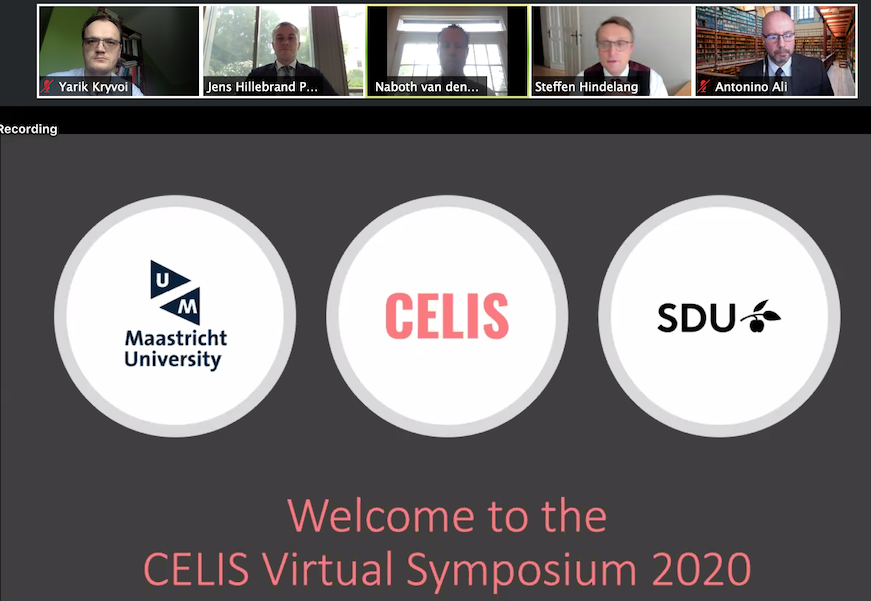 On 30 April 2020, I spoke at a webinar on the interaction between public international law and the EU Investment screening mechanism organised by Maastricht University and the University of Southern Denmark, which was a part of the Common European Law on Investment Screening (CELIS) project.

In 2019, the European Union established a framework for the screening of foreign direct investments in Regulation 2019/452. This regulation comes into force the provisions of the Regulation are set to apply from the 11 October 2020. The idea of the webinar was primarily to educate representatives of EU member states, businesses and other stakeholders who will be affected by the Regulation.

Participation of Ms Sylvia Baule, Deputy Head of Unit in the investment Unit of DG Trade of the European Commission who was the main architects of the Regulation made this event particularly interesting and valuable.

The first part of my contribution to the event focused on the interpretation of “serious risk that the foreign investor engages in illegal or criminal activities” (Article 4.2 of the Regulation). This rather briefly described category covers a large number of activities. To understand its meaning, I examined the legislative history of the Regulation.

An earlier draft of the Regulation contained a more extensive version, which gave examples of such activities:

(b) whether there is a serious and legitimate risk that the foreign investor engages in illegal or criminal activities, such as money-laundering, diversion of funds, corruption, financing of terrorism, organised-crime or infringements of intellectual property rights or breaches international human rights instruments and core ILO labour standards

This provision was apparently inspired by the 2017 European Commission’s Reflection Paper on Harnessing Globalisation, which referred to “criminals and terrorists, which will seek to exploit the open nature of EU economies and use new technologies to pursue illicit trades or spread hatred.” In addition, the 2017 reflection paper specifically mentioned other harmful behaviours such as corruption, tax evasion, corruption, resources extraction, illicit financial flows, harmful government subsidies or social dumping.

Most of these illegal activities can be broadly described as economic crimes. The question of fighting economic crimes in the European Union committed by foreign investors is far from theoretical. In recent years, the level of foreign direct investments from outside of the European Union has significantly grown, with particularly significant increases from jurisdictions such as China and the Russian Federation.

Unlike the United States, the European Union for a long time did have not had any strong and coordinated mechanisms to prevent corrupt activities, similar to the US Foreign Corrupt Practices Act of 1977. The Regulation 2019/452 is the first important step in this direction.

There are very good reasons to screen such activities on the European continent. It has been argued that for a long time EU member states made it easy for corrupt foreign officials to channel dirty money through shell companies based in various offshore jurisdictions.

The scandal with Danske Bank’s Estonian branch is a good illustration of that. Between 2007 and 2015 shell companies controlled by corrupt actors in the former Soviet Union States used these bank and EU’s financial system to launder money. By opening non-resident accounts in that bank, they managed to launder $230 billion through entities established in Spain, the United Kingdom, Sweden and many other European countries.

In this context, foreign direct investment screening can potentially play an important role. Most of the screening activities take place on the level of EU member states but the Regulation helps to coordinate those activities, exchange information and serves as the stepping stone to a more comprehensive supranational regime, which may develop soon.

Not only such scandals and dirty money have a corrosive effect on the rule of law and financial systems, but they also may come hand in hand with foreign interference into domestic politics and promote activities prevalent in countries with a weak rule of law. This may include bribery, political killings and funding military operations in places like Syria. So it is certainly a positive development that the European Union is taking seriously foreign investment screening, which will cover investors engaged in money laundering and other criminal activities.

The second part of my intervention focused on the interaction between foreign investment screening and public international law.

The initial question is whether it is really up to international law and international tribunals to second-guess the decisions of governments on blocking foreign investments on security grounds. The nature of essential security review is highly discretional. Although the Regulation provides for a right of recourse, investors usually have no legal recourse against unfavourable decisions, there is very little case law on guidance on the national level, let alone EU level.

Since international law should prevail over domestic law, the relevant question is what the international treaties and other instruments provide on the powers of states to screen foreign direct investments.

Traditionally, governments are averse to the idea of reviewing their decisions taken on national security grounds. As one government pointed in the process of drafting the ICSID Convention “highly political significance [of certain issues] made them unsuited for settlement on the plane of legal debate” and “questions of a political nature that affected governmental functions, vital interests, security, national policy or sovereign powers were non-justiciable.”

shall not prevent a Member from taking action which it considers necessary for: i) the maintenance of public order or the protection of public health, morals and safety; ii) the protection of its essential security interests; iii) the fulfilment of its obligations relating to international peace and security.

According to the OECD Code, a State can take measures, which it “considers necessary,” which means that this provision is explicitly self-judging. In other words, it should not be second-guessed by others. However, the OECD Investment Committee’s commentaries clarified that safeguard provision is deemed to address exceptional situations and exempt these restrictions from the principle of progressive liberalisation.

The OECD Council also adopted a recommendation which called upon member countries to be as transparent as possible in their notification to the Organisation of measures related to essential security interests.

To give a recent example, of security exceptions in international treaties, it is useful to look at the 2018 Agreement between the European Union and Japan for an Economic Partnership. Article 18.1 of this agreement provides the states a right

to define or regulate its own levels of protection in pursuit or furtherance of its public policy objectives in areas such as: (a) public health; (b) human, animal and plant life and health; (c) occupational health and safety; (d) labour conditions; (e) the environment including climate change; (f) consumers; (g) social protection and social security; (h) personal data and cybersecurity; (i) cultural diversity; (j) financial stability; and (k) energy security.

To sum up, international public law usually offers a high degree of deference to decisions of states on security-related matters and states often consider such as political rather than legal in nature.

International investment agreements differ when it comes to their requirements on admission and establishment of investment and the reviewability of such decisions by international tribunals.

International investment agreements can be classified into post-entry and pre-entry models depending on whether they provide for national treatment or most favoured nation treatment to investors with respect to admission and establishment of their investments.

Most international investment agreements, including older European model bilateral investment treaties, follow the post-entry model and provide for no establishment rights. In other words, such treaties are either silent on this or require that investments should be admitted in accordance with the law of the host state or require the written approval of the state of foreign investments.

In this context, investor-state disputes may arise if admission takes place in violation of the relevant domestic law and investors may arise claims of discrimination, denial of justice, fair of equitable treatment. An important question in this context is whether the most-favoured treatment clauses can extend to admission and establishment of investments.

Pre-entry international investment agreements move beyond investment promotion and protection and contain obligations with respect to the liberalisation of host state regulatory controls. In particular, it is not uncommon to see this model in the United States, Japanese and some regional trade agreements.

This model typically extends national treatment and most favoured nation treatment to the stage of admission and establishment, which may give rise to s significant number of dispute. However, often such treaties come with a list of exceptions and reservations, which allow states to rely on essential security interests to justify their regulatory decisions.

For example, Article Article 2 of the 2003 Japan-Vietnam BIT provides that

However, Article 15 of the same treaty stipulates that

1. Notwithstanding any other provisions in this Agreement other than the provisions of Article 10, each Contracting Party may:
(a) take any measure which it considers necessary for the protection of its essential security interests;
(i) taken in time of war, or armed conflict, or other emergency in that Contracting Party or in international relations; or
(ii) relating to the implementation of national policies or international agreements respecting the non-proliferation of weapons;
(b) take any measure in pursuance of its obligations under the United Nations Charter for the maintenance of international peace and security;
(c) take any measure necessary to protect human, animal or plant life or health; or
(d) take any measure necessary for the maintenance of public order. The public order exceptions may be invoked only where a genuine and sufficiently serious threat is posed to one of the fundamental interests of society.

From my participation in the meetings of the UNCITRAL Working Group III on reform of investor-state disputes, it appears that the overall trend in the world is to strengthen and harmonize essential security clauses in international investment agreements and domestic laws. The EU Regulation 2019/452 is also a step in this direction.

It is likely that in a number of years, as common European law on investment screening takes its shape, security screening applications and challenges of administrative decisions related to this will become a much bigger practice area for lawyers in Europe and other countries of the world may follow.

On 12-13 November 2020, a bigger conference on Investment Screening in the European Union. will take place in Brussels, where we will cover this and other issues in more detail.